Lithuania is located at the western end of the East European Plain, on the shores of the Baltic Sea. It borders Latvia to the north (576 km border), Belarus to the east and south (660 km), Poland (103 km) and the Russian Federation (Kaliningrad district – 273 km) to the southwest. Lithuania extends 373 km from east to west and 276 km from north to south, and is 65,300 km², which makes Lithuania the biggest of the three Baltic States. The country has a population 3.331 million, of whom 67% live in urban areas and 33% in rural areas. Lithuania is a flat country; lowland plains make about 75% of its territory. Agricultural land in Lithuania occupies 3,955,471 hectares, making 61% of the total country area, while forests make 30% of the total area of Lithuania. Waters occupy 2.7% of the total country area.

The name of Lithuania was first mentioned in 1009 AD in the Quedlinburg Annals. The Lithuanian state was founded in the middle of the 13th century by the Duke Mindaugas, who eventually became the first king of Lithuania. By the beginning of the 15th century, the Grand Duchy of Lithuania was one of the largest countries in Europe; its territory could have been extended from the Baltic Sea to the Black Sea. In 1569, the Grand Duchy of Lithuania and the Kingdom of Poland created a single State, which since 1648 had been significantly weakened by wars with Russia and Sweden. During the partitions of the Polish-Lithuanian Commonwealth between 1772 and 1795, the territory of Lithuania was incorporated into the Russian Empire. The tsarist rule may have sown the seeds of discontent leading to national movements. Independence was declared on 16 February 1918. However, after the outbreak of the Second World War, Lithuania became one of the soviet republics of the former Soviet Union till 1990. The restoration of independence was declared on 11 March 1990. In 2000 Lithuania started negotiations for the EU membership. In 2004 Lithuania joined the EU and NATO.

The Constitution of the Republic of Lithuania, adopted on 25 October 1992, stipulates the main principles of the Lithuanian statehood. Lithuania is an independent democratic state. The territory of the State of Lithuania shall be integral and shall not be divided into any State-like formations. According to the Constitution, the sovereign state power is vested in the people of Lithuania and is exercised by the President, the Seimas, the Government and the Judiciary.

The legislative body of the Republic of Lithuania – the Seimas – has 141 members elected for a four-year term on the basis of universal, equal and direct suffrage, by secret ballot.

In 2004, Lithuania became full-fledged member of NATO and the EU.

In the XIII-XIV centuries the rights to land were enjoyed by the grand dukes who disposed of their land as they saw fit. From the XIV century, large land estates of grand dukes were distributed to their faithful noble followers. In the XV century, the aristocracy became entitled to alienate or otherwise transfer their property. In the XVI century, three Lithuanian Statutes legally defined property relations. Land was divided in terms of their ownership (land possessed by the noblemen, peasants and the Grand Duke). With such a division, peasants were under obligation to carry a heavy burden for land use. In the XVII century, use of land depended on the size of property and the social status of the owner. In the XIX century, land cadastre was mainly used for taxation purposes. By the beginning of the XX century, a farmer could buy out the land from the estate owners, thus becoming entitled to own legally recognised property. During the interwar period boundaries of the state and private property were established, while former estates were re-parcelled to the new owners. Cadastral identification supplemented the land ownership and transfer system. Since 1940, when land nationalisation began, the cadastre system served for central planning. Land inventorying comprised the analysis, identification and description of land attributes. In 1991, the Republic of Lithuania introduced the land reform and started a process of restoration of ownership rights to real property. In 1992 the State Land Cadastre began legal registration of land parcels restored or privatised during the land reform. On 8 July 1997, the State Land Cadastre and Register (from 2003 – the State Enterprise Centre of Registers) was established. Step-by-step, Lithuania developed an integrated multi-purpose real property cadastre and register system.

The registration of land and other property, rights thereto is performed by the State Enterprise Centre of Registers subordinated to the Ministry of Justice of the Republic of Lithuania. The Centre of Registers administers the Real Property Cadastre and Register, the Address Register, the Register of Legal Entities; creates, implements, develops and manages information systems of the mentioned and other registers, keeps register archives; performs mass valuation of real property, cadastral surveying; provides the official information stored in the registers, updates cadastral map.

The National Land Service under the Ministry of Agriculture with a newly established 48 territorial land management divisions is responsible for the implementation of state policy related to land management and administration, planning, real property cadastre, state control of land use, cadastral surveying, etc. The National Land Service issues licenses to surveying companies and individual surveyors to perform the cadastral surveying.

Cadastral surveying of land is predominantly performed by private surveying companies, while buildings are surveyed by the public (Centre of Registers) and private sector.

The Ministry of Environment is responsible for preparation of territorial planning and supervision of construction works.

The involvement of public and private sectors in the land registration and cadastral surveying is summarized in a table below:

Lithuanian Association of Surveyors (LAS) was founded in 1994 and became a member of International Federation of Surveyors in 1995. LAS has been extended from 80 members (in 1994) to 301 members (in 2010) that are mostly geodetic surveyors, land use planners and land management engineers. Main activities include: private-public relations, organisation of annual conferences, summits and professional seminars, qualification trainings for surveyors.

The licensing system for surveyors has been established in line with the Law on Geodesy and Mapping and Licensing Regulation of Geodetic, Topographical and Cartographical Activities (National Land Service, Government Decree). Licenses are issued by the National Land Service under the Ministry of Agriculture. Land use planning activities are performed according to the Law on Territorial Planning and Qualification certificates (permits).

Licensing is required mainly for geodetic works (networks, gravimetric measurements, cadastral surveys of real property objects, setting out of construction objects) and topographical and cartographical activities (aerial surveying and topographical mapping, mapping of utility networks, creation of Base map databases (GDB) and navigational charting). Requirements for the licenses: higher or university education, experience in the work related to the licensed activities (from 3 to 5 years), certain number of credits of appropriate subjects studied.

Lithuania has one cadastral system for the entire territory of the country, and it is an integrated Real Property Cadastre and Register system. The system covers the urban and rural areas, the privately and state owned property, the land, houses and apartments.

The system features comprehensive data on all specified real property objects including all kinds of land uses (urban, rural, protected areas, public places), inland water bodies, roads, buildings (houses, apartments), engineering utilities, etc.; also provide data on legal possession of real property objects, encumbrances on the rights, servitude, mortgages and legal facts. There is a direct link between the cadastral map and the Real Property Register. The real property cadastre and register system uses the necessary information from other public registers and cadastres, such as forestry cadastre, entrails cadastre, cadastre of protected areas, register of cultural heritage and others.

In Lithuania there are no informal settlements as such; only some separate cases of illegal construction occur. However, the scale of the problem tends to diminish due to the revised legal acts.

The main features of the Lithuanian real property register and cadastre system:

Lithuania has a unified Real Property Cadastre and Register system for the registration of real property objects, rights to these objects and legal facts.

Cadastral maps demonstrate all properties graphically corresponding to the registered title and linked to it through the unique identifiers.

Cadastral map covers the entire territory of the Republic of Lithuania (GIS database, which is being currently developed, contains graphical cadastral data on 1.9 million land parcels and 40,000 engineering structures). 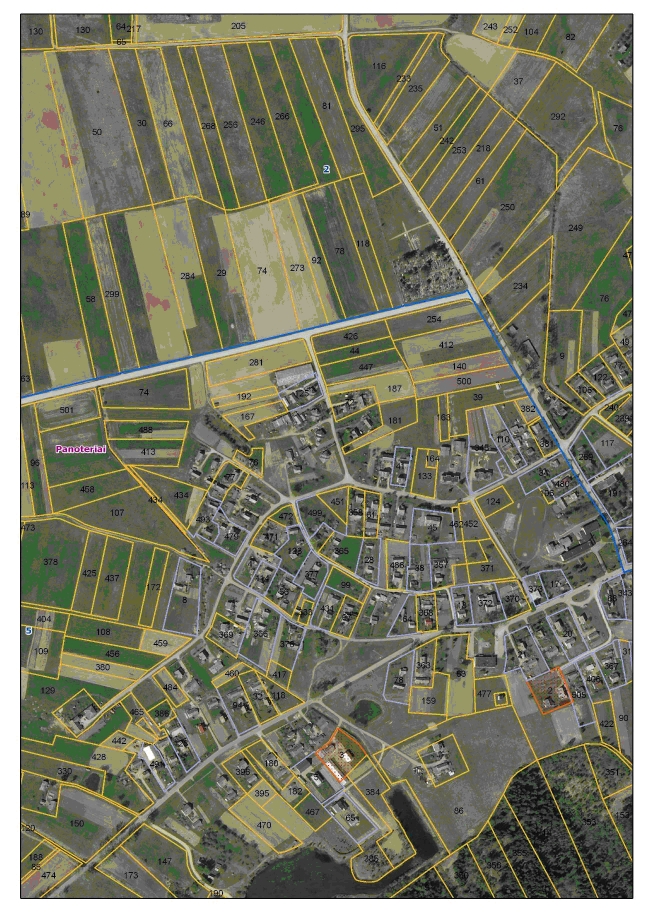 Real Property Cadastre map is used for the purposes of territorial planning, activities relating to preparation of land management plans, other cadastres and registers, determination of real property taxation, and for other purposes.

Extracts of cadastral maps are provided in analogue and digital forms as well as through the Internet for the wide range of users: surveyors, developers, municipalities, land management divisions, administrators of other registers and cadastres, banks, insurance companies, notaries, real estate agencies, private persons and other institutions.

During the restoration of the ownership rights to land, in ca. 75 % of cases simplified methods of surveying were used. Therefore, the boundaries of land parcels do not always precisely represent the real situation on site. Usually the precise measurements are made using geodetic devices, the boundaries are established accurately, but sometimes it happens that, when revising the boundaries, disputes occur between the owners of adjacent land parcels.

One of the most important recent activities of the Centre of Registers is the development of a public electronic service for real property transactions (NETSVEP). NETSVEP offers a possibility for the real property transaction parties to conclude a transaction within a shorter time period by performing all actions related to acquisition of real property and registration of rights thereto at the notary bureau without direct applying to the Centre of Registers. The notary who is going to verify the transaction in person receives electronic certificates and data on whether property subject to transaction was not sold to other person, was not mortgaged, seized or has no restrictions on the rights to dispose of the property, which are needed to conclude a transaction. Upon request of the person who acquired the property, a notary verifying the transaction may register the rights of ownership to real property in the Real Property Register electronically.

Another latest development – digital certificates – allows implementing the following operations: (1) provision of information on real property without contracts; (2) signing of contracts on sale of information on-line; (3) service for the preparation of authorisations for the third parties to represent legal entity; (4) authentication in NETSVEP and other information systems of the Centre of Registers; (5) verification of real property transaction contracts with qualified e-signature of a notary.

Electronic client self-service system is in operation that enables to get all types of excerpts from the Real Property Register as well as information of any amendments made on data of the owner’s property. A new service was launched in July 2009 that offers possibility for legal entities and natural persons to get information of who have requested access to their property data in the recent 6 months.