Cambodia is located in South-East Asia, with a total area of 181,035 sq km lying north of the equator and next to Vietnam, Thailand, Laos and Gulf of Siam. The population is approximately 15 million, with an annual population growth rate of about 1.6%.

The whole territory of Cambodia contains 25 provinces/municipalities with a total of 197 districts, 1633 communes and 14,138 villages.

The history of modern land management and administration in Cambodia begins with French initiatives in the late 19th century. The first Civil Code was adopted in 1920 and it established a system of French land law that recognized private property rights. Some traditional Cambodian rights, in particular that of creating a land right simply by occupation and possession, were included in the Civil Code. During the 1960s there was an adequate system of land management, including confirmation of private property rights with land records including cadastral maps and land titles. The land management system started deteriorating during the war period 1970-1975. Thereafter under the Pol Pot regime (1975-1979), not only were private property rights completely destroyed but all cadastral records, including cadastral maps and titles, were destroyed. The professionals in land law, land management, registration and surveying were either re-deployed to the countryside, left the country or were executed. Starting in 1979 the State of Cambodia organized collectives as a basis of claiming user rights to agricultural land: residential use rights were allocated on the basis of occupation while ownership of all land remained in the hands of the state. In 1989 the government re-introduced private property rights, with ownership rights granted for residential land of a size up to 2000 sq. meters, possession rights for cultivated lands less than 5 ha, and concession rights for plantation land greater than 5 ha. According to a new land law adopted in 2001, ownership titles can be issued for many types of private uses in addition to residential. In 2011 Cambodia enacted a new Civil Code, which cancelled or modified some provisions of the 2001 land law, but left intact the basic legal regime described above.

Up to now there is no private sector in land registration and cadastral surveying. The Government is still discussing specific requirements to introduce a qualification system for surveyors through a draft law on Surveying and Mapping.

There is no professional association for cadastral surveyors yet, but at the moment there is the Board of Engineers Cambodia (BEC), derived from The Engineering Institution of Cambodia (EIC) has a committee on Topographical Survey and Cadastre, which has about 20 members. In the draft sub-decree on the Management of Surveying, Mapping activities and Service, Surveyors and surveying firms registered by the MLMUPC may form a surveyor’s association. The MLMUPC shall provide assistance in the organization and establishment of such association. The Ministry of Land Management, Urban Planning and Construction is affiliate member of FIG since 2002.

Currently, there is no licensing system in place for cadastral surveying professionals working in the cadastral system. The Ministry of Land Management, Urban Planning and Construction has drafted a sub-decree on the Management of Surveying, Mapping activities and Service to provide the legal basis for the private sector profession with the goal that most or all land surveys will be done by private sector.

Between1992-1997 the Land Titles Department (LTD) (later absorbed into the MLMUPC) oversaw a diploma degree on cadastre at the Prek Leap Agricultural College. In those years, systematic in-house training in the LTD took place continuously.

In 2002, the Land Management and Administration Faculty was established in the Royal Agriculture University in Phnom Penh, with the support of the Land Management and Administration Project (LMAP), which was based in MLMUPC. The support covered curriculum development, a professor exchange program, constructing a building, providing furniture and office equipment and equipment to use to train students in surveying and land management. The Faculty established two degrees: a bachelor degree of four years and a diploma degree of two years. LMAP was later discontinued but MLMUPC support to the faculty continues.

In Cambodia, there is only one cadastral system—a title registration system—for the whole country. The Cambodian cadastral system supports legal land parcel identification of public and private lands. There are problems with illegal settlements on state land such as on road corridors, waterways, national parks, forests etc.

The cadastral system in Cambodia is operated by the district offices of the Ministry of Land Management, Urban Planning and Construction and operated in such a way that land parcels are surveyed and adjudicated (investigated) in the field and then corresponding land ownership titles are recorded in the land registry. The land registry is kept and maintained at three levels: national (General Department of Cadastre and Geography), provincial and district. The smallest unit in the land registry is the land parcel. A land parcel or cadastral unit is a specified land area that is situated within a single commune or sangkat ,that is not divided by a joint, indivisible boundary, that belongs to one person or several persons having an undivided ownership, and that is used in a single manner. 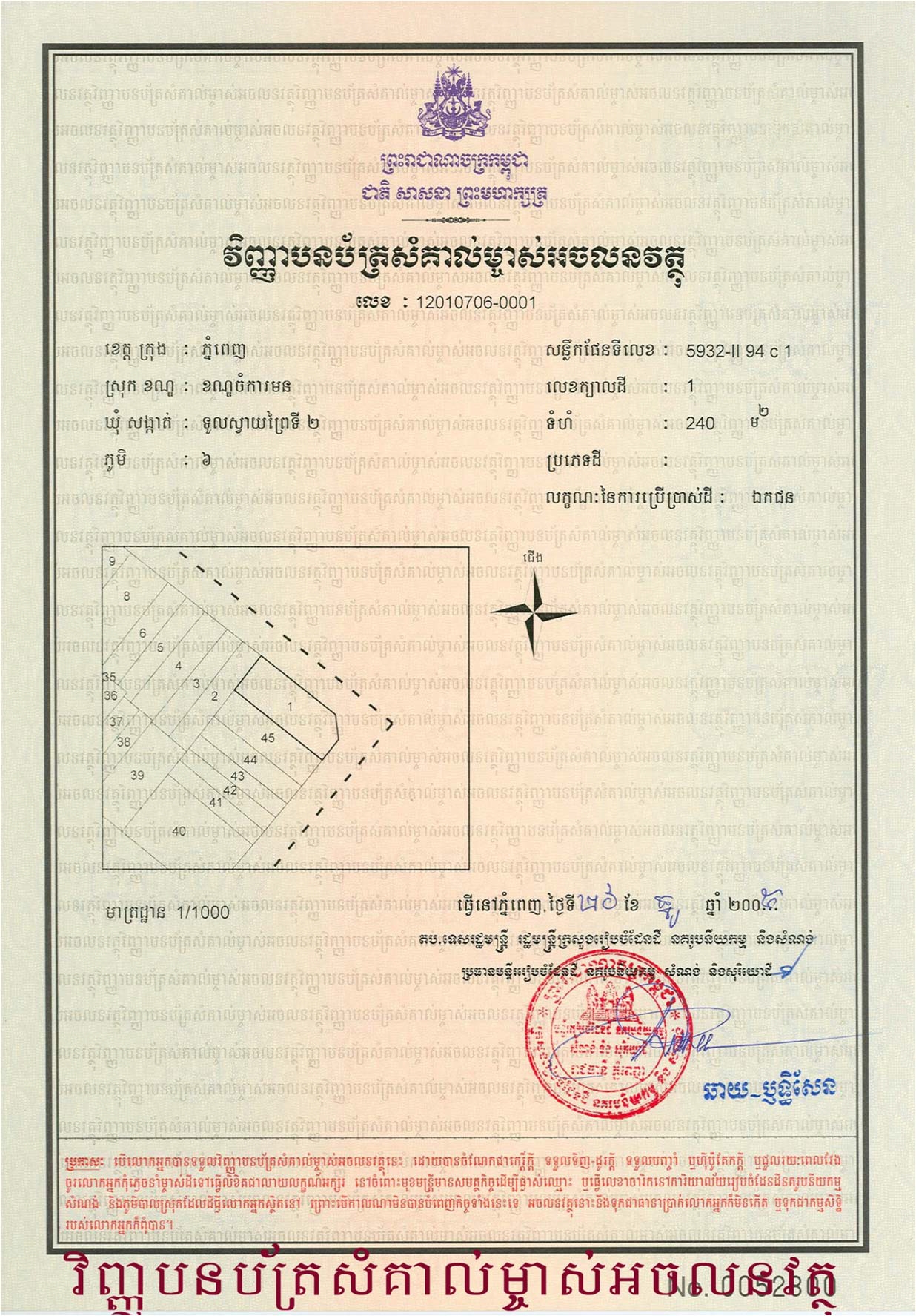 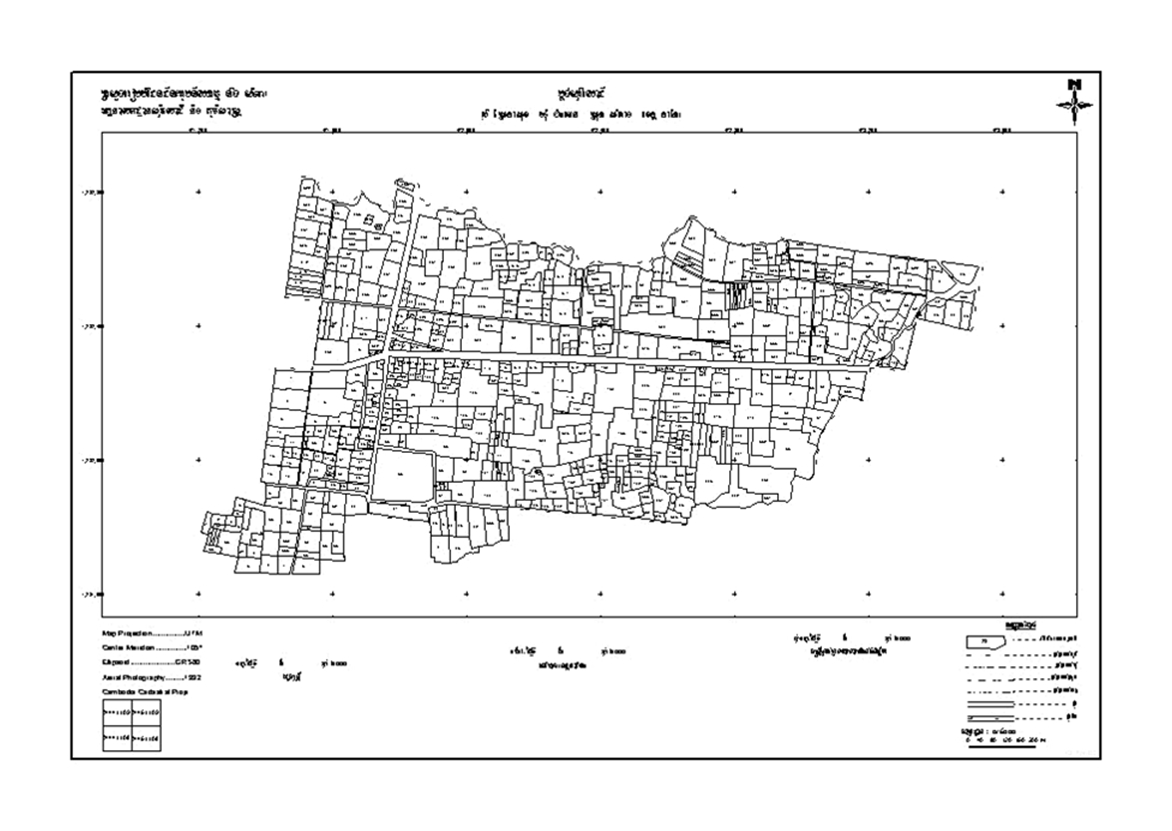 Spatial Data Infrastructure (SDI) still has to be developed for Cambodia by the MLMUPC.