Indonesia was colonized by the Dutch in early seventeen century to mid nineteen century.  The date of August 18, 1620 was noted as the first basis implementation of the cadastre in Indonesia, indicated by the pronouncement of the VOC (Vercenigde Oost-Indisch Campagnie: an early Dutch company led to the Dutch colony) on regulation to control the lands distributed to its employees and resettled inhabitants from the Netherlands.  But it has been only having adequate implementation since 1961 by the Government Regulation No. 10 Year 1961 as the completion of Art. 19 Basic Agrarian Law (BAL): Act No. 5 Year 1960 (UUPA);

Partners for the BPN are the Land Deeds Officials (PPAT) who issued the land deeds (transfer and mortgage) for land registration and the Licensed Surveyors for surveying and mapping the land parcels in accordance with the government surveyors.

Certificate of land titles are issued by the Land Offices and they are valid as the strong evidence.

As a unity state, Indonesia maintains centralized parcel-based land administration offices in each City/Regency, which are mostly still manual today.  Indeed, there are 38 regency and municipality land offices and 15 provincial land administration offices running a Land Office Computerization (LOC) projects, but they are still partly manual.  The National Land Agency (BPN) is responsible for land administration. According to Presidential Decree No. 26 Year 1988, BPN is a Non-Departmental Government Agency that has tasks as follows:

“BPN is to assist the President in developing and managing land administration, based on the Basic Agrarian Law and other related laws and regulations that include regulating land use, land holding, and land ownership, land titling services, land surveying and land registration, and other activities related to land issues based on the President’s policy”.

Most of cadastral surveys are undertaken by the government surveyors within the BPN.  Since the introduction of Government Regulation NO. 24 Year 1997, the role of private surveyors have been taken part, both the Surveying and Mapping Companies and the Licensed Surveyors.  The Land Deeds Officials (PPAT) has also taken parts on the land registration processes.

There are some Professional Organizations or Associations that are involved directly or indirectly in the land administration:

Land registration in Indonesia is conducted based on the Article 19 Law No. 5 Year 1960 (UUPA) and Government Regulation No. 24 Year 1997.  The specific regulation identifies guidelines for licensing and registration of private cadastral surveyors and the undertaking of cadastral survey by the private sectors is the State Ministry of Agrarian Affairs/Head of BPN Regulation No. 2 Year 1998.

As stated in Article 19 BAL (UUPA), to guarantee the juridical assurance of land ownerships, the government conducts the land registration that covers all the regions of the Republic on Indonesia that consists of (a) surveying, mapping, and booking the lands; (b) registration of titles and transfers of those titles; (c) issuing the letter of evidence of land title that acknowledge as the strong evidence.  Afterwards, based on the Government Regulation No. 24 Year 1997, the of land registration is defined as “the sequence activities conducted by the government continuously and regularly, consist of physical and legal data acquisition, processing, registration, representation, and maintenance, in forms of maps and registers of land parcels and strata title units, and issues the certificate of titles and encumbrances. 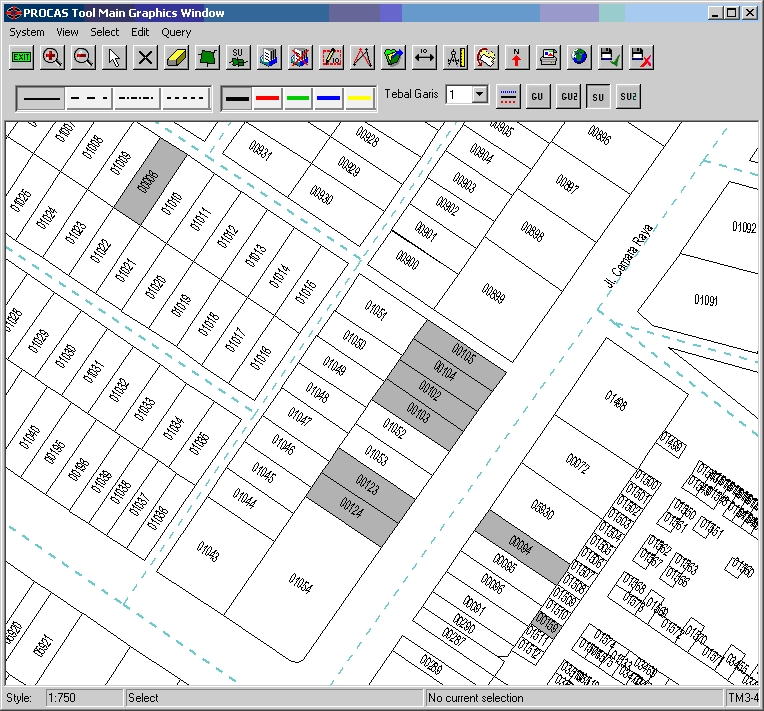 Here are two examples of the different digital cadastral databases from City of Tangerang and Regency of Tangerang. 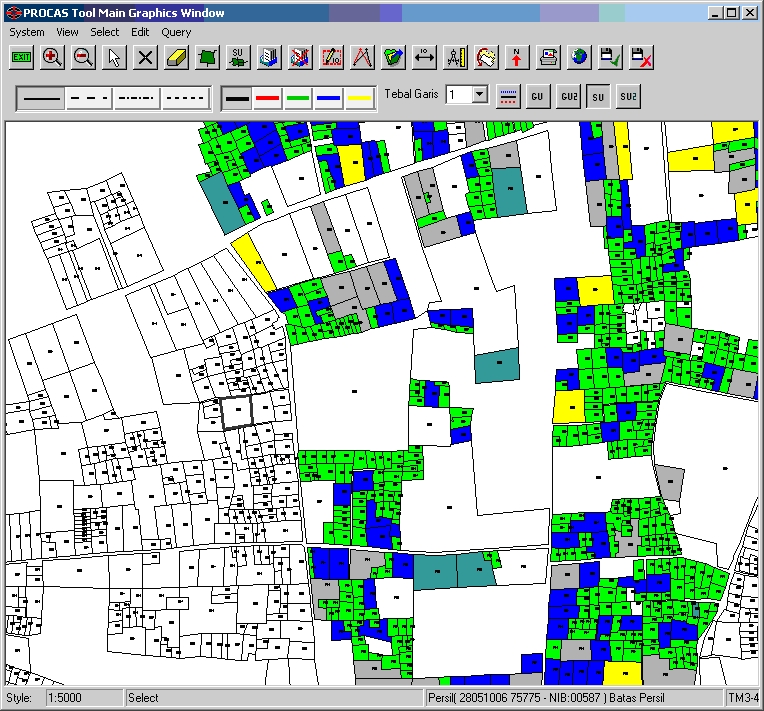 Today, cadastral maps are still mainly used for the BPN purposes, although they may also be used by other government institutions and local government, it is not very frequent, one of some reasons, because they have not been digitized yet.

They’re some important problems that the cadastre currently is confronted with:

The current initiatives that are being undertaken: