Jordan‘s total area is around 89,000km2 and with a population of about 5 millions inhabitants.  The Capital city of Jordan is Amman with population of about 1.5 million inhabitants.  80% (est.) of the total area is desert.  16% (est.) settled areas, 4% is arable land.  All forest, including re-planted areas, cover less than one present of the country.

73% of the population are urban; less than 6% of the rural population is nomadic or semi nomadic. 70% of the urban population lives within 30 km of the capital city, Amman.

The land that became Jordan is part of the richly historical Fertile Crescent region.  Its history began around 2000 B.C., when Semitic Amorites settled around the Jordan River in the area called Canaan.  Subsequent invaders and settlers included Hittites, Egyptians, Assyrians, Babylonians, Persians, Greeks, Romans, Arab Muslims, Christian Crusaders, Mameluks, Ottoman Turks, and, finally, the British.  At the end of World War I, the territory now comprising Israel, Jordan, the West Bank, Gaza, and Jerusalem was awarded to the United Kingdom by the League of Nations as the mandate for Palestine and Trans Jordan.  In 1922, the British divided the mandate by establishing the semiautonomous Emirate of Trans Jordan, ruled by the Hashemite Prince Abdullah, while continuing the administration of Palestine under a British High Commissioner.  The mandate over Trans Jordan ended on May 22, 1946; on May 25 Jordan became fully independent from Great Britain, and has developed without interruption as the independent Hashemite Kingdom of Jordan ever since.

The establishment of the first institution dealing with land registration can be traced back to 1857 when the Ottoman government created Tabu (land registry offices) in Bilad Ash Sham (Greater Syria), which included Jordan.  Its main task was to make a kind of land inventory for taxation purposes and for this they created what they called then Tabu books where they documented a descriptive information about the land, such as its value, owner or beneficiary (user), neighbouring owners, roads, valleys, etc.  There was no real mapping or surveying process at this stage.  Jordan legally remained part of the Ottoman empire until 6th Aug 1924, the date of certification of Luzanne treaty, article (139) of which entitled and enabled Trans Jordan to acquire the registers and documents related to public and private property.  The government soon began re-organizing lands and properties; it issued the first by-law of land.

In 1927 the Law of Land and Valuation was issued.  This law implied the fixing of borders of villages, state forests and often land properties.  The name of Lands Department appeared for the first time in 30/9/1929 after unifying the Surveying Department, Treasury Land Department, and Department of Land Registration.  An English official was assigned by the Mandatory Government to preside it.  These developments marked the beginning of producing cadastral maps with 1:20000 and 1:10000 scales at first and later on other scales were used such as 1:5000, 1:2500, 1:1250, 1:1000 and even 1:500 in some dense built-up areas, and since then the cadastre and registration in Jordan are combined in one authority and both components form the cadastral system in Jordan.

After unification of Trans Jordan and the west bank, the Lands and Survey Departments in both banks of river Jordan were unified, its headquarter was in Amman and it became responsible for all land registry offices throughout the country.  By the year 1950 most of the rural areas were registered.  In 1952 and 1953 most of the laws concerning land and water settlement (Land and water rights), registration, etc. were enacted and applied in both banks.

The Department of Lands and Survey (DLS) is the agency responsible for both the land registration and the cadastral surveying on a national level, with 32 land registry offices and 17 surveying groups.  DLS is under the umbrella of the Ministry of Finance.

The licensed surveyors (private surveyors) are involved mainly in cadastral surveying transactions like parcel subdivision, unification, boundary reestablishment etc.  There is no significant involvement of the private sector in land registration aspects.

The licensed Surveyors Association (LSA) was established in 1999 with 134 members and today it counts 234 members.  It is important to clarify that the membership of licensed surveyor in this association is not obligatory.

Licensing of surveyors is according to by-law that regulates this profession (Cadastral Surveying).  The surveyor should have no less than 2 years diploma in surveying after high school and no less than 2 years practical work and 6 months of training for surveying engineers and 7 / 2 years for surveyors with 2 years diploma.  All must pass an examination.

The cadastral system is one for the whole country.  Same laws are applied for urban, rural, private owned land, state owned land etc.  Land rights are obtained by applying the same laws and principles regardless of the location and use.  However there are some informal settlements occupying state owned land.

The cadastral concept in Jordan is based on the unity and integration of both the land registration (land title) and the cadastral surveying (maps).  The main units of cadastral system are land parcels as show in the first scenario and it’s surveyed and registered on a national level.

The cadastral system in Jordan embraces in itself both, the land registration and the cadastral surveying.  Land register contains the names of landowners and there shares, identification numbers of parcels (unique number), areas, initial values, easements and mortgages.  All maps are in digital form and land registry records are automated.

Boundaries and streets lines are the spatial representation of the map.

The data model is ARC/INFO coverages.  Features are identified by coordinates and attributes and stored in double precision.

Logical layers are administrative layers and parcels polygons layers, however by the end of this year (2003), DLS will convert all coverages to the latest version of ESRI product ArcGIS Geodatabase. 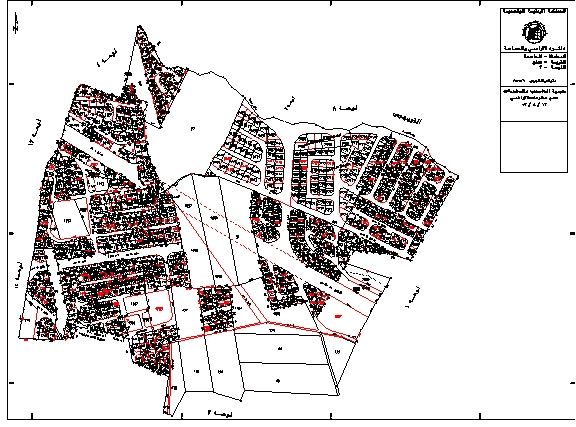 The cadastral map in Jordan is used as a base map for most purposes such as utilities, transportation, developments plans and land use planning.  The unique identification number for the parcel helps DLS to maintain the data incrementally and provide a lot of analysis on a national, regional and local level.

The ministry of rural affaires and the greater municipality of the capital city Amman, which are responsible for the development of rural planning and zoning are relaying completely on DLS cadastral maps (expropriation transaction, roads, etc.).